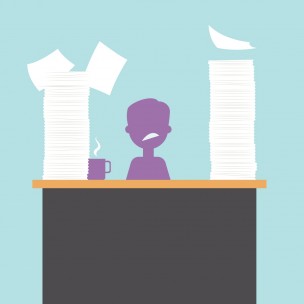 Why should work stress be addressed?

According to the results of a survey1 by the Institute of Behavioural Sciences at Semmelweis University, over one-half of Hungarian employees consider their workplaces to be frequently stressful.

According to the data of the Hungarian Central Statistical Office2, in 2014 the number of accidents at work increased by 14%. Experts3 argue that accidents are most frequently attributable to unmanaged work stress.

A study by the WHO⁴ found that due to constant performance pressures and excessive workload, depression will be the largest contributor to the disease burden by 2030.

In Europe, the cost of mental health disorders (both related and unrelated to work) is estimated at an annual EUR 240 billion. Less than a half of that amount is attributable to direct costs such as medical treatment, while EUR 136 billion is incurred from reduced productivity, such as sick leave or absenteeism.⁵

EU-OSHA National Focal Point Manager Katalin Balogh reported that according to their survey closed in 2015, the costs attributable to work stress in Hungary is estimated at an annual HUF 440 billion, an amount equivalent to the price of Metro 4.

...
¹Based on the Work Stress Survey launched by the Work Stress and Stress Management Research Group of Semmelweis University on 1 May 2013. http://semmelweis.hu/mediasarok/2014/05/15/kiderult-mitol-es-mennyire-stresszesek-a-magyar-munkavallalok

I do not agree I agree